“One of those hard-to-have conversations, not just here (in UBC), but all across Canada is about racism – both as an individual experience and as a systemic reality,” said Alden Habacon in his introduction to Active Witnessing: An Empathetic Response to Racism held on November 5 at the Liu Institute for Global Issues. Habacon is UBC’s Director, Intercultural Understanding Strategy Development and he moderated the panel discussion which was co-presented by the Equity and Inclusion Office and the Liu Institute for Global Issues.

Listen to the panel discussion on Soundcloud. If you are interested in learning more refer to the recommended readings below.

Held during UBC’s Thrive Week, the event discussed how subtle forms of racism – including derogatory language, jokes and comments can impact the mental well-being of individuals, as well as the community at large. Habacon said the event was an opportunity “to have a long overdue conversation about the linkages between social anxiety and racism and to explore the value and limitations of empathy as a response.”

The panel included Dr. Toni Schmader, Canada Research Chair and Professor in the Department of Psychology at UBC; Dai Kojima, a PhD Candidate in Human Development, Learning and Culture and a co-chair of Global Queer Studies Research Group at the Liu Institute for Global Issues; Eva Thomas, a Diversity Advisor at Access & Diversity; and Aida Mwanzia, an undergraduate student with a sociology major who is also Member Development & Training Coordinator with AIESEC UBC.

A commercial from Australia produced by Beyond Blue, an NGO in Australia working to address issues associated with depression, anxiety disorders and related mental illness was shown. The Invisible Discriminator and its companion behind the scenes video are part of an anti-discrimination campaign, targeting subtle racism against Indigenous Peoples in Australia, and the impact of racial discrimination on mental health. Panelists were asked to give their reactions and relate it to their own experiences and academic work and audience members were encouraged to comment. 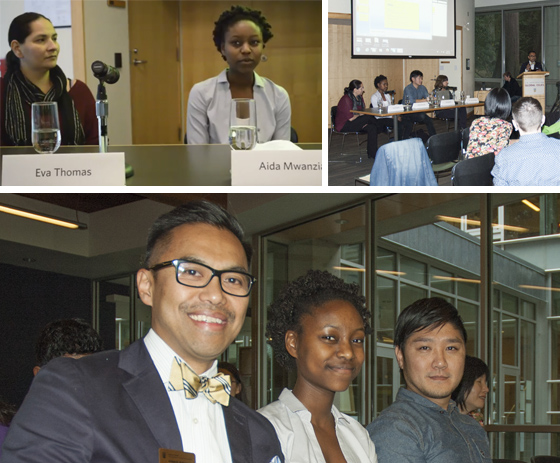 In his comments, Kojima, whose studies and activism includes transnational sexual migration and anti-racism in queer cultures, referenced Australia’s recent “Stop the Boats” campaign which prevents immigration and asked “what empathy is possible” with this type of government policy. “The most difficult thing we can see about racism in the video is not the lack of empathy, but the impossibility to name something racist and the social conditions that enable such moments “.

Mwanzia, a third year international student reflected on her experience on campus. “As a student you hear these things on a regular basis and you start to rationalize it as being normal or being ok but it’s not necessarily the case. For me what stood out were the jokes (at the end of the video) and also the concept of imagined racism versus real racism, the concept of ‘is it really happening or am I imagining it?’ In terms of jokes the term ‘FOB – fresh off the boat’ is a term that is really used to deride a lot of incoming immigrants for not conforming and it’s a way to pressure people to assimilate.”

Referring to a part of the video showing a young woman facing discrimination in a job interview Mwanzia said this rang true for her. “You are not expecting anything overt but you are wondering if people will see your merit and if people will see what you can bring to the table. If they will see your worth over the fact that you look completely different from everyone in the organization.”

Eva Thomas is one of the lead facilitators and trainers for UBC’s Really Campaign, an active witnessing program through Access & Diversity. She said “When I first saw the video, as an Aboriginal person, I immediately recognized it and it made sense. My next thought was ‘we need to do this in Canada because this is happening in Canada and immediately I thought this will never go over in Canada because we sometimes have a hard time looking critically at our own issues happening in our society. You could literally place this in downtown Vancouver and it would be relevant.’

Dr. Schmader added that subtle forms of racism can have a detrimental effect in the university environment. “More subtle forms (of racism) can sometimes be more pernicious. From a psychological perspective what happens, especially if it’s something you are experiencing chronically, is that you are constantly on guard, vigilant and paying attention to what’s going on in the environment, and all these extra cognitive processing. In the research I’ve done, when people find themselves in situations where they have to overthink, ‘what does this mean for me and for my identity’, this puts a tremendous burden, and on a university campus this puts a burden on your ability to focus.”

After viewing the RSA Shorts – The Power of Empathy with Dr. Brené Brown, the panel and audience discussed if empathy can be used to do more than acknowledge racism on campus. They discussed “active witnessing” as a tool for individuals to respond in an empathetic manner towards those who experience discrimination and enable the interruption of discriminatory comments or situations. It was clear from the comments from the panelists and audience that both individual experiences of racism and systemic racism are of concern at UBC and that empathy is not the solution to dismantling those systems.

Although the discussions were varied in their view of empathy, Dr. Schmader agreed with the Power of Empathy video that connection is important. “The degree with which you can develop connections across group boundaries, personal connections, is part of what helps to break down misperceptions, stereotyping and prejudice. But even when members of different groups become friends they can still hit a boundary when issues related to ones experience of subtle bias or discrimination cannot quite be understood by the other. In those situations the best one can do, from the majority group member’s view is to care about trying to understand and to care about having the conversation.”