Recap: In Conversation with David Chariandy 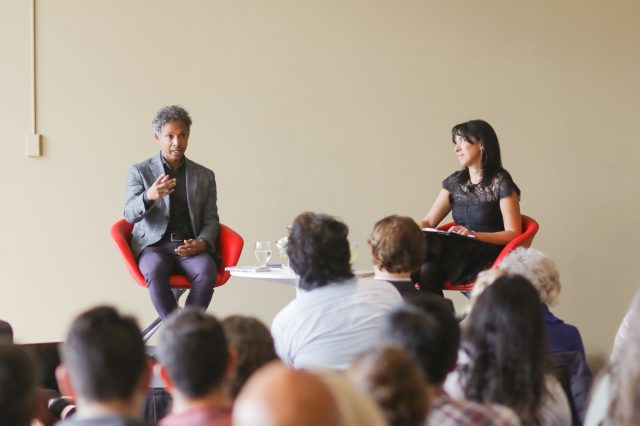 It was a full house at Sage Bistro on October 3rd, with 150 attendees chatting over coffee, tea and cookies as they eagerly awaited the arrival of celebrated author and professor, Dr. David Chariandy.

Dr. Chariandy was the first author featured by the IGNITE Book Club, an ongoing series hosted by Dr. Minelle Mahtani, a former journalist at the CBC and current Senior Advisor to the Provost on Racialized Faculty. Created by and for racialized faculty, Ignite Book Club couldn’t have picked a better inaugural speaker than Chariandy. He came prepared to discuss everything from his latest release, I’ve Been Meaning to Tell You: A Letter To My Daughter to personal anecdotes about his family and life as a devoted parent.

Guests listened with focus as Chariandy responded to Mahtani’s thoughtful inquiries with stories that ranged from joyful to frustrating. Ultimately, his words touched on experiences that seemed painfully familiar for many in the room; daily micro aggressions, blatant slurs from peers, the complexities that come with “inherited trauma” and so on. He spoke gracefully about being confronted by his racial identity even in the places one would least expect: waiting in line at a water fountain after a pleasant afternoon with his then four-year-old daughter.

The room was filled with nods and audible hums of agreement after such stories. To use Chariandy’s words, it was a powerful way of saying: I feel you. After all, to see your experiences represented is no small gesture, particularly for racialized people who have often been erased, misrepresented and neglected by the media. For Chariandy, it was a self-proclaimed “revelation” that resulted in him physically “sinking” into Carleton University’s library carpet.

During his second year of university, Chariandy got his hands on James Baldwin’s The Price of the Ticket. Prior to this, he had never encountered a collection written by a writer of colour. Years after the fact, he would attribute his reaction to a profound feeling of “connection”, an epiphany that manifested in Baldwin’s words which he recalled, verbatim: The world is white no longer, and it will never be white again.

Connection was one of the driving forces behind his most recent memoir, I’ve Been Meaning to Tell You: A Letter To My Daughter. This, combined with the sobering realization he felt when his daughter was born. Chariandy spoke honestly of the fear that came with the knowledge that he could not protect his daughter from racism any more than his immigrant parents could for him, or he for them. All he could do was “simply tell [his] own story” in the hopes of forging the kind of connection that he had found as a student.

Despite the heavy subject matter, there were moments of levity and laughter—Chariandy’s shout out to Beyoncé comes to mind—steered by the ease and expertise of Mahtani’s moderation.  After an hour of thorough discussion, the evening closed with Chariandy reading a passage detailing a moment between himself and his daughter.

Perhaps it is not so terrible, then, if as Chariandy suggests, “telling stories is all we can do”. Because it is through these stories that we learn to see and think differently, about the world, our neighbours and ourselves.

See more photos from the event.