Knowing the Land Beneath Our Feet: UBC’s Indigenous Histories and Presence

By Spencer Lindsay and Sarah Ling

Story originally published in The Talon on January 26, 2015

Every day, thousands of UBC students pass by a totem pole that comes from the depths of Viner Sound near the former Ḵwiḵwa̱sut̓inux̱w village of Metap.1 Hockey players at Thunderbird Arena haul their gear past a duck depicted in mid takeoff, crafted with the copper-leafed remnants of an old Volvo car, and a 41 foot tall depiction of the renowned Musqueam warrior qiyəplenəxʷ looks out for law students at the new Allard Hall. But for the most part the stories behind these places are untold.

Instead, we define the history of UBC through images like the one below. It shows former UBC president Leonard Klinck in front a shack filled with the dynamite used to blast the remaining stumps of the cedar rainforest that once stood here. The official caption recognizes this as the first building on campus, effectively erasing the possibility that there was something here before. 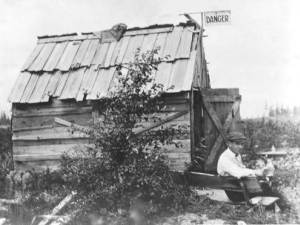 For myself and my colleague Sarah Ling, the many Indigenous stories of UBC, symbolized through art, architecture and place names, offer opportunities to reflect on our position as visitors on Musqueam territory. The həm̓ləsəm̓ transformation stone offers teachings about taking care of the land, and the q̓ələχən village reminds us of why Musqueam warriors chose this place to live and why settlers later followed their lead.

We hope that through sharing these stories more widely, we can change the way students, staff and faculty understand UBC and know the land they occupy.

Knowing the Land Beneath Our Feet

Knowing the Land Beneath Our Feet (KLBF) is a new initiative that we’re excited to be leading. It provides a digital walking tour highlighting the artworks, buildings and places that tell of the deep histories and continued presence of Indigenous people on the land now known as UBC’s Point Grey Campus. Supported by an initial grant from the Equity Enhancement Fund, we’re currently in the project’s pilot phase, testing out new curriculum models and a web-based tour platform in 12 classes across 6 disciplines. The project is a partnership between the First Nations Studies Program (FNSP),2 Aboriginal Initiatives at the Centre for Teaching Learning and Technology (CTLT), the Coordinated Arts Program (CAP) and Digital Media Technologies. Together with a team3 of instructors, advisors and staff, we’re working to turn the walking tour into a robust learning tool that can eventually be adapted to a variety of classroom and public uses.

For team member and FNSP chair Daniel Justice, the project is an important intervention in the way we understand UBC and its relationship to Indigenous peoples both historically and today. “We have responsibilities to this place, to our Musqueam hosts, to the histories and the futures of the land and those who call it home,” Justice says, “and Knowing the Land Beneath Our Feet helps motivate a different understanding of these living legacies and ongoing relationships.”

It’s important to realize that UBC’s 100-year history4 has been built upon thousands of years of Musqueam history. Sarah Ling, who is the project’s co-lead, reflects on the many teachings we receive from friends and colleagues from Musqueam: “Our initiative is following in the footsteps of incredible work and ongoing initiatives led by the Musqueam Nation to educate visitors to their lands and pass on teachings within their own community. A recent example is the series of stunning exhibitions at the Museum of Anthropology, Museum of Vancouver, and Musqueam Cultural Centre called c̓əsnaʔəm: The City Before The City, which encourage people to witness and share vital parts of Musqueam’s language, culture, history, and values.”

David Gaertner, member of the KLBF development team and postdoctoral fellow in FNSP, is excited to see the impact of the project when put in the hands of UBC students, instructors and community members. Gaertner, who piloted the tour last semester in his class on Indigenous New Media, says the tour “employs a unique instance of augmented reality, layering Indigenous history and stories onto physical locations, and in doing so, it makes the land our text – the campus our classroom.” As an instructor, he sees KLBF “as a means to investigate the ways in which technology can respectfully deepen student engagement with land, history and Indigenous peoples.”

As students ourselves, we’re committed to keeping our project open to student input. First Nations Studies Student Association President and Talon editor Matt Ward was one of the first students to test out a preliminary version of the digital tour last semester. He sees the potential for the tour to remind people of their relationship to this land. “I’m really excited about this project and the opportunities it will give students that are looking for ways to engage in difficult conversations that they might feel nervous about having.”

Another aspect of our pilot phase is ensuring that Musqueam and other Indigenous communities connected to the tour are properly consulted. We’ve sought permission from Musqueam to begin our work, and will be reviewing and strengthening our site descriptions for the tour with them. We also plan to enhance our current materials by adding audio and video commentary from community members to the digital walking tour platform. For the time being, students will experience a beta version of the digital tour that won’t be published until we have full approval and have collaborated on the next important phases of development.

This isn’t our first foray into campus change and activism together. Back in 2011, Sarah and I successfully facilitated a community-led naming project that resulted in the first UBC buildings named using hən̓q̓əmin̓əm̓, the Musqueam language, and Musqueam’s orthography. This initiative was sparked by how troubled we were with the egregious misuse of Indigenous names at Totem Park Residence. For instance, as a resident of Dene house in 2006, the floor above me thought it appropriate to call their Day of the Longboat team ‘the Savages’ with costumes and Pocahontas chants to match.

We had learned so much through our time in FNSP, and felt a need to pass on some of that knowledge to other UBC students, specifically a basic understanding of historical and ongoing forms of colonialism, problems with cultural appropriation and misrepresentation, and an understanding that these names are connected to Indigenous communities. Now Totem Park Residence has two Musqueam place names, həm̓ləsəm̓ and q̓ələχən, that were shared through consultation with the community whose unceded land UBC is located on and gives students a deeper sense of the history of UBC in relation to Musqueam and Vancouver.

Names alone won’t create the kind of lasting change we’re looking for. At Totem Park there are still very few ways of accessing basic, introductory reading materials or of hearing the stories of this land. Sarah, through her work at CTLT Aboriginal Initiatives, has been creating a film series to educate students about the origins of each house name. The series of 8 films feature the voices of individuals who come from these communities and are connected with UBC.

Knowing the Land Beneath Our Feet has been a natural progression from the naming project. It’s our effort to reach farther than Totem Park, because the problem of misrepresentation and erasure of Indigenous histories and presence exists throughout our campus. The idea was really sparked when one professor heard the story of our naming project and saw the potential for a learning tool that would help her communicate to students the relevance of Indigenous issues to their daily lives.

After hearing a CBC radio interview about the Totem Park naming project we did back in 2011, CAP Co-chair Kathryn Grafton was intrigued by to the potential for our work to tie together larger Indigenous issues to her students’ everyday experiences on campus, many of whom lived in Totem Park. The following year, she asked Sarah and I to speak to her students. “When they agreed, we talked about how, ideally, we would leave the classroom,” Grafton reflected, “so that students could have an embodied experience – a place-based experience – hearing stories while standing together in front of sites that they frequently passed during their daily routines. Spencer and Sarah then created a custom tour that prompted students to reconsider their place in this territory.”

For the next two years we built on that original tour, adapting it to other classrooms and presented it at international conferences, pecha kucha nights, and most recently at the installation of UBC President Arvind Gupta.

After nearly 5 years of working with Sarah on decolonizing initiatives on campus, we can see the end of our time together on campus in sight. We hope that when this project is complete, we won’t be needed to lead tours anymore. And more importantly, we hope that what we’ve accomplished, the small ways we’ve been able to change the way UBC represents, interacts with, and teaches about Indigenous peoples, shows other students that they can do the same.

We’re planning a major public launch close to September 2015, when our materials are complete and have been reviewed and approved. In the meantime, if you’re interested in getting updates on our project, or you think your faculty or unit should be one of the first to receive our educational materials when they’re ready, please join our mailing list.

Spencer Lindsay graduated from the School of Community and Regional Planning with a specialization in Indigenous Community Planning in November 2014. He’s now working as a community development worker at Cedar Cottage Neighbourhood House and Mount Pleasant Neighbourhood House. Spencer is Métis and grew up on the traditional territory of the Lekwungen people in Victoria, B.C.

Sarah Ling was born and raised as a 4th generation Chinese-Canadian in Prince Rupert, Northwest B.C., on the traditional and unceded territory of the Tsimshian people. She is currently completing her master’s regarding the history of Chinese market gardening in the Musqueam community through the Interdisciplinary Studies Graduate Program. She works at Aboriginal Initiatives in UBC’s Centre for Teaching, Learning, and Technology.