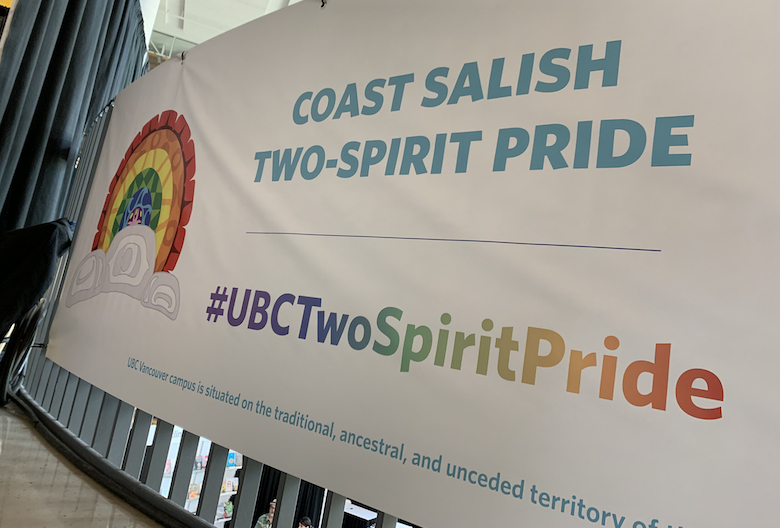 A Coast Sailish Two-Spirit Pride banner was recently unveiled at the AMS Nest.

The following description was provided by the artist and the Musqueam First Nation:

The design was created using traditional Coast Salish art style and shapes, and emulates the rainbow Pride symbol already used by our settler LGBTQ+ friends. It was created to support our own Two Spirit/Indigenous LGBTQ+ programming in our communities, and to acknowledge the land, identities and experiences of our Two Spirit ancestors and relatives.

SYMBOLISM: Red represents Fire; Orange represents Vision or Visibility for Two Spirit People; Yellow is the Sun; Green shows the Land, where our Identity comes from; Blue represents Water; and Purple depicts the məθkwəy̓ plant (in the territory where Mack is from), but it also represents the ecosystems of different Coast Salish territories. The rainbow design is cradled by Coast Salish clouds.

It is important to recognize not every Indigenous Nation or Indigenous person who is LGBTQ+ will apply the term Two Spirit as an identifier. Some Nations already have their own traditional words for Two Spirit folk. How each individual chooses to identify themselves is to be respected.

Currently, Musqueam Nation is working to identify a new term for Two Spirit, in our own hən̓q̓əmin̓əm̓ language. Until that work is complete, we recognize and use the term Two Spirit to be intentionally inclusive of the many diverse ways individuals and Nations describe Indigenous LGBTQ+ relatives, traditions, identities, experiences, and knowledges.”

The banner production was supported by the UBC Equity & Inclusion Office and the Faculty of Education through the Jane Rule Initiative funded by Dr. Robert Quartermain.