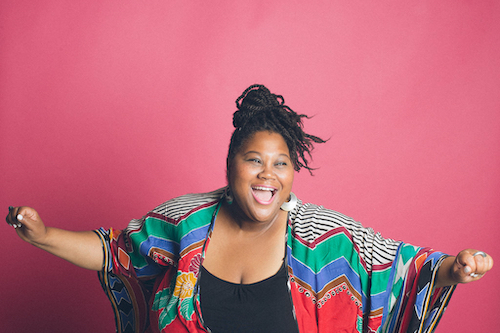 On December 16th, join us as Dawn Pemberton helps us round-off our four-part virtual series of events centred on joy and resilience, fun, and activism that bears witness to what it means to be Black in BC.

Vibrant, genuine and soulful, Dawn has deep musical roots that take her powerful voice from gospel and soul to jazz, funk and world music. She has become a staple of the Vancouver music scene and can often be found “tearin'” it up as a vocalist, pianist, teacher, adjudicator, choir director and “go to girl” for live performances and studio sessions.

She currently spends her time touring with her own original music project as well as with Canadian blues juggernaut,The Harpoonist & The Axe Murderer and The Blues Berries. Dawn has toured extensively throughout Canada and Europe and has performed with musical greats such as Betty Levette, John Boutte, Kenny Werner, Kurt Elling, Robert Randolph & The Family Band, Randy Bachman, Ruthie Foster, The Hamiltones, Linda Tillery and has opened for musical heavyweights Maceo Parker, St. Paul & The Broken Bones, The Philosopher Kings and Lee Fields. Dawn is the founder and Artistic Director of Roots ‘N’ Wings Women’s Choir and teaches masterclasses and workshops all over North America.

Her debut solo album, Say Somethin’, released on DoRight! Music won Best Urban Recording at the 2015 Western Canadian Music Awards and has received praise from around the globe forecasting her as “…the new queen of Canadian soul.” A passionate educator and performer, Dawn approaches music with a sense of adventure, quirkiness, and serious groove and shapes it into her own unique and dynamic package. Tight, expressive and bold, Dawn will hit you where it counts, funk you up and make you say “Go ‘head!”.

Black Artistic Expressions in B.C. is a community-university collaboration developed in partnership between local Black artists, IBPOC Connections: Staff and Faculty, and the Centre for Culture, Identity and Education at the University of British Columbia. Join us at the heart of each month for a celebration of Black lives, Black culture and activism, and Black musical and poetic expression.

UBC is located on the traditional, ancestral, unceded lands of the xʷməθkʷəy̓əm (Musqueam) people.

About Your Host: Ndidi Cascade

Ndidi Cascade, who is of Nigerian-Italian-Irish-Canadian heritage, is a Vancouver born and based hip hop vocalist. She is also a songwriter, recording artist, educator and program facilitator. Ndidi has showcased her music across North America and internationally– from classrooms to stadiums, and her music has been featured on Much Music and MTV Canada. She has shared the stage with talents such as Wu-Tang Clan, Femi Kuti, Digable Planets, The Mad Professor, De La Soul, K-OS and K'naan.

Ndidi Cascade also facilitates and manages programs that use hip hop, spoken word and dance as a medium for healthy self-expression. She is the founder of the “Word, Sound & Power” and “Elementalz” education programs, which are designed to raise awareness of the origins of the hip hop movement. Ndidi is also a World Music Education independent school teacher, and she currently tours with her group Metaphor, showcasing interactive hip hop shows in elementary and high schools around British Columbia.