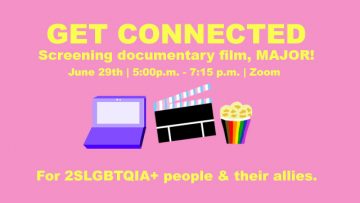 Student leadership of the Equity and Inclusion Office is holding a Get Connected Night for Self-Identifying Queer, Trans, and Two-Spirit People (2SLGBTQIA+) and their allies.

We invite you to join us for a screening party of Major!, a film about the iconic Black trans rights activist Miss Major.  The film screening will be followed by a discussion exploring the instrumental role Black folks have played in queer liberation, as well as an intersectional reflection by Two-Spirit people who are celebrating pride month and Indigenous history month together.

MAJOR! explores the life and campaigns of Miss Major Griffin-Gracy, a formerly incarcerated Black transgender elder and activist who has been fighting for the rights of trans women of colour for over 40 years.

Miss Major is a veteran of the Stonewall Rebellion and a survivor of Attica State Prison, a former sex worker, an elder, and a community leader and human rights activist. She is simply “Mama” to many in her community. Her personal story and activism for transgender civil rights intersects LGBT struggles for justice and equality from the 1960s to today.