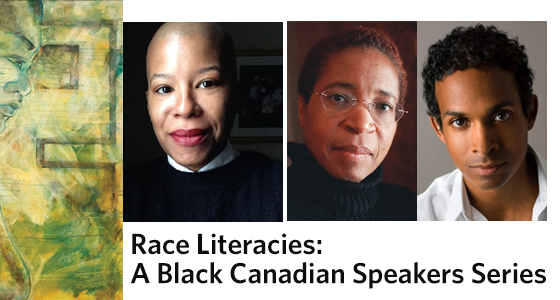 Annette Henry from UBC’s Department of Language and Literacy is organizing an exciting series of forums with renowned Black Canadian scholars in 2015-16. Race Literacies: A Black Canadian Scholars’ Series will feature two scholars engaging in a dialogue with each other and with the audience about their work and issues of race and social justice. After each forum there will be opportunities for small group discussions with students regarding curriculum and research in Canadian Black Studies.

The series launches on November 12 with an afternoon and evening event. Christina Sharpe, Associate professor at Tufts University will speak at 2 pm at St. Johns College, UBC Vancouver. The evening event—the official launch of the series— features poet and novelist Dionne Brand and novelist and critic David Chariandy in conversation at SFU’s Beedie School of Business in downtown Vancouver at 7 pm. Both events are co-sponsored by UBC and SFU.

To RSVP for these events: bit.do/RaceLiteracies

Annette Henry said “We hope this series will promote new teaching and research relationships with UBC/SFU professors interested in teaching/learning and researching in the area of Black studies as well as a transforming disciplinary knowledge. There is exciting research being done that is rarely included in the curriculum. The curriculum we share with students is important for them to understand themselves, their communities and society from informed perspectives.”

Race Literacies: A Black Canadian Speakers Series is funded by a UBC Equity Enhancement Grant and co-sponsored by the English Department at Simon Fraser University. Other UBC sponsors include the Department of Language and Literacy Education, the Centre for Culture, Identity and Education, the Institute for Gender, Race, Sexuality and Social Justice and the Jane Rule Endowment for the Study of Human Relationships.