Equity & Inclusion Office
Home / News and Stories / What is a washroom audit? Here is what you need to know.

What is a washroom audit? Here is what you need to know.

As part of UBC’s Inclusive Washroom Project, Darcy Bandeen, an Arts undergraduate student, conducted an audit of nearly 1050 washrooms across the UBC Vancouver campus in Spring of 2022.

To learn more about the purpose of the audit, we asked Darcy to share some insights about their work.

What is a washroom audit and what were some of the things you were trying to assess as part of the audit?

When auditing the washrooms, I was collecting data on a variety of features. One of those features was bathroom signage. Some washrooms may be labeled with the ‘accessible” sign even though they do not meet the current BC Building Code for Accessibility. In other cases, gender markers may or may not have been updated to reflect changes in usage.

I was also collecting data on additional features, like automatic door openers, menstrual product dispensers, baby change tables, or showers. Finally, I was reporting any security concerns, like offensive graffiti, or major maintenance problems, that I encountered along the way.

I spent a month gathering this information which we collected in order to help support navigation and wayfinding for members of the UBC Community and visitors to the campus.

UBC Okanagan is also undertaking an audit. The aim is to complete that audit by the end of 2022. 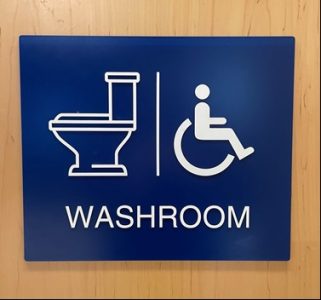 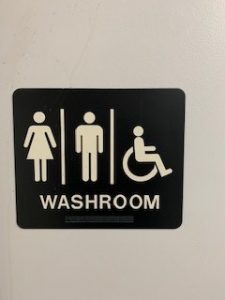 What led to this project?

There is currently a need for easy-to-use information that shows where gender neutral and accessible washrooms are located on campus – this is particularly relevant for trans and gender diverse people and/or those who require working accessibility features in washroom spaces.

What were some of the things you noticed as you visited the washrooms across campus?

One of the areas that emerged is the need to have more bathrooms that suit the diverse needs of UBC community members. Some buildings have only binary gender bathrooms (men / women), or single occupancy all gender accessible bathrooms which tend to mostly be locked and/or require key access during regular business hours.

This audit so far confirmed what we heard from the community in terms of the additional needs around inclusive, accessible, washrooms and removing barriers to access for students, staff, faculty members and visitors to the UBC campus.

Meeting those needs over time, however, will require navigating the existing constraints faced by institutional partners, such as budget and/or physical, building space.

On a lighter note, I also saw a lot of bathroom graffiti and hilariously specific signs (like one that said “no soup in the toilet!!!”) 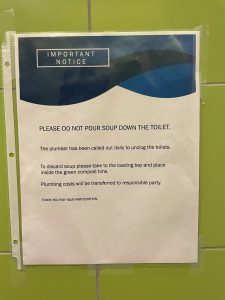 Example of a notice posted in a washroom. 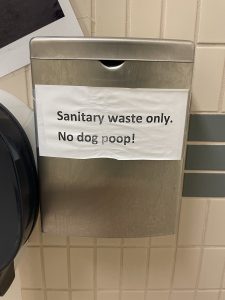 Example of a notice posted in a washroom.

What were some of the challenges that you faced in this project?

While many people talked to me and expressed interest in the project, I also received a lot of stares & questions as I went in and out of the bathrooms. Although diminished by the presence of a clipboard, gender policing was frequent, and speaks to the need for more accessible all-gender bathrooms across campus, especially in older buildings, where binary options (men/women) are standard.

Gender policing happens when people enforce their expectations of normative gender presentation on other people, regardless of their gender identity. This is something that not only effects trans and gender diverse people, but also cisgender people (those who identify with their sex designation given at birth), who don’t express their gender in typically masculine or feminine ways.

How do you see this work having a positive impact on many trans, gender fluid, non-binary, and gender diverse people?

My work collecting data on washrooms was just the first step in improving equitable access for all UBC community members. With this data, staff members at the EIO will be able to create an updated, interactive map that shows where accessible and single occupancy all gender bathrooms are on campus.

The EIO also aims to collaborate with the Center for Accessibility and the Centre for Workplace Accessibility to ensure washrooms that are marked ”accessible” are in fact accessible and usable for those who need them – for both those with a visible or invisible disability – or whether the signage will need to be updated to accurately represent the type of washroom that it is.

Have you heard any feedback from users so far?

Although the output of the data has yet to be created, I did chat with several people along the way who were interested in the project, and stated how having this data would directly, positively impact their day-to-day lives while navigating campus.

Where can people share comments or concerns with respect to washrooms at UBC?

What are the next steps for this project?

From here, the data I collected will be utilized in a variety of different projects, and used as a reference while considering campus-wide initiatives to renovate washroom spaces. Rachael Sullivan, Equity Education Strategist, is leading the project, and will have the most up-to-date information about where and how this data is being used.

As I went around each building collecting information, many people spoke to me about the project, and their ideas about bathroom access on campus. During those conversations, people, especially in staff and faculty areas, expressed their desire for more all-gender and accessible washrooms on campus. Some people told me about how their floor, department, or work team had individually designated their washrooms as all-gender – some of them had taped over gendered signs with handmade, sometimes handwritten, signs that say “toilet,” “gender neutral,” “all gender,” etc. This practice was relatively common, as I saw it numerous times while conducting the audit.

Another thing that folks frequently commented on was the breakdown of gendered bathrooms. Some buildings have gender “built” into them – like the older Engineering buildings which originally didn’t have any women’s washrooms, or the Education building, which has more women’s than men’s washrooms. One staff member told me that having to walk up and down the stairs every day to access a women’s bathroom in their building (which has more men’s than women’s or all-gender washrooms) made her question her right to take up space in that Faculty.

As it stands, the building code regulates the minimum regulatory requirements for health, life safety, and accessibility which includes the number of fixtures for men and women. And while codes get updated every year there are many buildings on campus that were built to codes whose standards are now outdated.

Reducing minority stress is an important step to making our entire campus more equitable, and washroom access plays a large role in that. Minority stress refers to the psychological stress that someone endures due to their minority status, and how that stress accrues in their lifetime to poorer socioeconomic or health outcomes than non-minority groups.

When discussing the project, many of my fellow trans and nonbinary friends have told me how uncomfortable they feel using binary-gender washrooms on campus. Having also experienced gender policing, a few of them stopped going to class altogether in order to avoid harassment and questioning in washrooms. I can’t overstate the importance of creating more accessible all-gender spaces – for all members of our UBC community. The inclusive washrooms project is a reassuring and promising step in that direction.