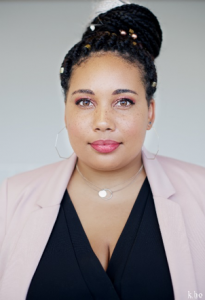 On March 14, we’re pleased to host “Lead, Succeed, and Inspire: Join Justice Minister Jody Wilson-Raybould for an Evening with Changemakers” in recognition of International Women’s Day and the International Day for the Elimination of Racial Discrimination.

Ahead of that event, our panelist Cicely Blain – writer, facilitator, activist, artist, founder, Black Lives Matter Vancouver, and UBC alum – shares their thoughts on activism, community, and creating change. Cicely graduated in 2016 with a degree in Modern European Studies and a minor in Russian language.

Many students at UBC are trying to make their activism more impactful & effective. What activism have you been involved in that brought a productive response? Any tips or insights?

I’ve been involved in activism for as long as I can remember. I used to go on marches with my grandma to stop gentrification in my home town, a suburb of London. It was instilled in me for a long time that some systems are broken and you have to fight to fix them. When I was 15 I became involved in a youth group and we advocated for more educational and leisure opportunities for disadvantaged youth. We won $8 million from the British government.

My passion continued at UBC. The first protest I went to was in my third year when we campaigned against the rise in tuition fees. And to celebrate my 22nd birthday I organized an event in solidarity with students of colour fighting institutional racism. This inspired me to found Black Lives Matter Vancouver when I graduated. I would encourage people who are passionate about change and frustrated with injustice to channel their energy into something positive. Through BLM I’ve been part of creating so many amazing spaces, hosting events for 1000s of people, making people feel seen and celebrated, and making people smile.

What are some lessons you have learned from being a founder of Black Lives Matter Vancouver?

I’ve learnt a lot of lessons but mainly that community is what keeps us going. Sometimes the world seems scary and you feel helpless when thinking about systemic issues but if you focus more on local change and building communities and helping people around you, it’s very impactful and very rewarding.

Being an activist and having my name know around the city, lots of people asked me to do workshops and educate them on being better allies. I’ve always looked for a way that I can make these things my main thing in life while still surviving capitalism. I want to make change in schools, nonprofits and businesses so that everyone feels more included and safe.