In Conversation with Eternity Martis 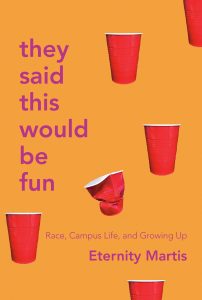 “Who is afforded rage? Who are the voices on the front lines who are praised and uplifted, and whose voices are still on the margins, scolded and shamed for also wanting their moment to be angry?”

That’s a quote from Eternity Martis’ new book! Join us for a virtual chat with acclaimed Black journalist Eternity Martis in conversation with Dr. Daniel Heath Justice about Martis’ new memoir, “They Said This Would Be Fun: Race, Campus Life and Growing Up.” Martis’ book offers a crucial depiction of systemic racism on Canadian campuses.

Brought to you in partnership with IBPOC Connections, an initiative supported by the UBC Equity & Inclusion Office and the Senior Advisor to the Provost on Racialized Faculty.

Eternity Martis is an award-winning Toronto-based journalist and editor whose work has been featured in The Huffington Post, VICE, Chatelaine, Canadaland, Salon, CBC, Hazlitt, The Walrus, The Ryerson Review of Journalism, J-Source, Xtra, The Fader, Complex and many more.

Her work has helped newsrooms including The Ryerson Review of Journalism, Xtra, the Toronto Star, and tvo.org change their style guides to capitalize “Black” and “Indigenous”; change policies on anti-Black racism in Canada; and has been taught on academic syllabuses at universities across Canada. She is also a National Magazine Awards 2017 finalist for Best New Writer and the 2018 winner of the Canadian Online Publishing Awards’s Best Investigative Feature.